In the midst of the Covid-19 pandemic the United States finds itself in yet another period of grief and anger over the recent, and well documented, senseless killings of Black men and women by officers entrusted with our safety. The resulting widespread and ongoing demonstrations against the racist oppression of African Americans and other minorities has lead to much needed self-examination of our roles in this human tragedy.

There appears to be a new understanding and awareness of white privilege and the systems that support it. Challenging and needed conversations are happening in families, neighborhoods, and in our Druid communities. We are a part of the change that is happening.

Here is a triad for where we find ourselves now –

We can respect others as we listen and grow. (And it is a simple gift to protect others’ health by wearing masks.)

May the green woods, changing skies, and still waters bless you. 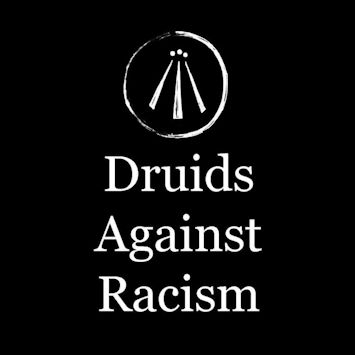 The white robes many of us wear now has nothing to do with what the original Druids, or ancient to modern Celts wore. So since we don’t have decades of blokes showing up and being photographed at big public rituals like in the UK, people in North America really wonder about us when we wear these robes. It can even be hard to explain to those interested in joining our groups.

*   The original historic description from Pliny the Elder was that the Druids wore white clothing (not robes), and would likely have been just light colors.

*   Fraternal Druids in the UK still wear the Nemyss (Egyptian head-dress of the Pharaohs), taken from Golden Dawn and other magical orders.

Since the emergence of the second Ku Klux Klan (KKK) in 1915, white robes with or without a hood has developed an association with KKK regalia. The KKK is a white supremacist hate group that mostly wears bleached white robes with pointed head coverings, similar to traditional Druid clothing (white robes with hoods).

*   Isaac Bonewits – ADF co-founder relayed that decades ago ADF members started wearing white berets so people could find each other at meetings in public places. But they found out the KKK was also wearing white berets, and – “The Mother Grove immediately decided to abandon the use of them, for fear that our folks would be confused with theirs.”

*   I live in the southeast US, and our Grove holds open and public rituals in parks for the seasonal festivals. I have personally had a black child give a scared look when seeing my robe, and I don’t want it to happen again. So unless I am at a Druid only gathering, I will not wear a white robe again at our public rituals.

*   KKK Members have also been showing up without hoods, and related groups are sporting white polo shirts. (Look at groups 1, 4, and 5 at this site listing extremist clothing.)

Most of the clothing suggestions in the next section happen to be found across cultures, but many try to add other elements to their Druid outfits. If you adopt the elements of a culture other than your own- especially as part of a dominant culture over a subjugated culture- this can be exploitation or even a form of desecration.  This would be antithetical to the intent of ritual garb. We are post-colonial and rich in the cultures of those that have come to North America, we can be aware and figure this out.

*   In some areas if you wear white clothing and a white head covering that could be seen as copying followers of Voudon or related African diaspora traditions.

*   If you are of European descent in the US and wear Native American leggings, with a rawhide drum, burning white sage, by a Plains teepee, and doing a sweat lodge with Lakota words for your ‘spiritual’ practice that would be an extreme example of misappropriation. (See the 1993 Declaration of War Against Exploiters of Lakota Spirituality to see how angry one large group of tribes and bands is about this issue.)

*   Some have even raised issues of appropriation for those with Celtic heritage (itself a difficult concept) here in the US.

Close
Challenges of Using ‘Traditional’ Druid Robes in North America, by Dana Wiyninger
Here’s Why It Hurts When People Say, “All Lives Matter”, Vanity Fair 2016
A national youth advocate and educator explains why mattering means so much to black Americans